If you think the shortest road to a man’s heart is through his stomach, you are aiming too high.

I don’t understand human logic when it comes to the difference between genuine and fake. Which side are we really on?

On the surface we give too much value to everything genuine.

We even use the term as a compliment.

But what we all really want, deep down, is the fake stuff.

Well, maybe not in the diamond area.

Not only people want to accumulate fake stuff around them, they don’t seem to get enough of them.

Take for example our fascination with movies.

We even give actors prizes for the best fake story that touched our hearts.

When films try to get closer to reality, or to being genuine, we treat them with despise and demote them to “documentaries” which end up filling dead airtime on TV.

What brought all this to my mind was the personal experience I recently had when I went with a friend to discover the magic of “genuine fake” merchandise markets in Dubai.

You should see how ordinary folks are suddenly turned into caring archeologists caressing each gen-fake piece lovingly and patiently, as if it was the last of its kind on Earth.

As a human being suffering from a weak spot for watches and shoes; I could not resist the urge to buy one “genuine fake” item of each.

It did not take much time for me to be duly sold and to be separated from my money like a certified fool.

The looks were great and the price was affordable.

As the Americans say, I was a happy camper.

I left the store 10 inches taller.

By the way, to this day I still don’t understand why Americans associate “tallness” with happiness!

Do they assume that all short people must be always miserable?

Determined to impress my co-workers with my new acquisition; I put my new watch proudly on my wrist and made sure it is strategically positioned within the line of sight of every person I interacted with.

The volume of compliments I received convinced me that every penny was way well invested, and that I absolutely made the right decision.

Since the watch worked perfectly and looked great, I contemplated going there again to buy few more watches for the different days of the week.

That was when I noticed a minor problem with the cherished watch.

What am I going to say to my colleagues?

How can I explain to them the reason my calendar is different from the rest of humanity, or that my months happen to have more than 31 days, considerably more!

I couldn’t possibly go back and ask for a refund.

Naturally I couldn’t also ask for the watch to be sent to the manufacturer for proper repair, since no manufacturer will claim it.

I had to bite the bullet and retire the watch in the socks drawer.

Last time I checked, the date counter was pushing well over 70.

I pulled the “genuine fake” shoes to wear them as planned and that was when I noticed the second problem.

From inside the shoes, there was the magical phrase that moved me to buy them – it said “Made in France”.

From the outside, however, the shoes had this on them: “Made in England”.

Which one should I believe?

Is it France, or England, or both?

Is it the North Atlantic Treaty, perhaps?

Did the US have a hand in this joint venture somehow?

Why would France and Italy collaborate on a shoe that would end up in a dusty Dubai market and then then finds its way inside my humble closet?

Unable to cope with this dilemma, I retired the shoes as well.

Thanks to the “Fenuine Fever”, I am now the un-proud owner of a lunatic numbers-chasing watch and a schizophrenic shoe that should be preserved in history next to the Concord.

I graduated from college recently with a B.A. in Business Administration. I have one question related to a term I keep hearing about: what is the meaning of P&L?

Sent by: Distracted in Class

I understand your predicament.

P&L is one of those elusive phrases often heard and thrown around casually in corporate corners everywhere.

P&L can mean different things depending on where you stand, sit, lie down or hang on the corporate ladder.

What follows is a helpful reference list intended to explain the different meanings of P&L:

If you are busting your ass daily in the shitty annals of faint power in lower to mid management corporate levels – P&L means Pressure and Labor.

If you are a female employee who is trying to climb the corporate ladder via plastic surgery – it means Pluck and Lift.

If you suffer from permanent insatiable hunger – it means Pizza and Linguini.

If you are an aspiring ass-kisser, sneaky-back-stabber, or a malicious eavesdropper – it means Please and Lick.

If you are involved in the fragrance industry – it means Patchouli & Lavender.

If you are a conniving opportunist, a scheming social climber or a certified corporate/industrial/media bitch – it means Plot and Lure.

If you are an obsessive, demanding and a control freak with an overbearing style – it means Pushy and Loud.

If you are a CEO – it means Pampered and Lavished.

1-      Why do I want to work for this company? Because you put an ad out there you fucking moron!

3-      What do you mean there are gaps in my resume? Let’s spill water on it and see if it will leak through it, jerk!

4-      Sure hell I can manage the P&L, who says no to Pussies and Lesbians all day long, booyaa!

5-      Explain the term Opportunity Cost? It must be the cost of dinner to get the opportunity for a one-night-stand with the bitch, right?

6-      When you say Joint Venture you mean I can smoke my joints here without venturing out to the parking lot, right?

7-      Market Segmentation is a piece of cake. You have the haves and the have-nots, what else is there?

8-      Protecting the Brand from what? Are there Brand rapists out there?

10-   Yes, I do have a question for you: What is your policy on Freudian slips?

1- For me, personally, the position I like most is doggy-style.

2- I’m good with pressure – I don’t need to kick ’em tires to figure they need air.

3- Sitting for long hours causes itchy butt, and that causes smelly fingers for some.

4- Expected salary would be the highest, what else?

5- Past experience is done and over with, am clean and sober now.

6- Can’t wait that long, my parole officer is waiting for me.

8- I’ve been Single, Married and Divorced, which box should I fill?

9- Software? that’s for sissies, am a hardware kinda of a guy.

10- Can’t have you call my previous boss, he was an asshole and I kinda hit him with a 2×4 and he held a grudge against me since then.

1- If she insists on googling online reviews before deciding on a restaurant >>> She is a flirtatious indecisive teaser who will never go all the way.

2- If she keeps her mobile on the table and checks messages often during dinner >>> She is a sexually cold non-orgasmic corporate bitch.

4- If she likes sharing with you all the plates >>> She likes threesomes – bingo!

5- If she asks for double straws or if she drinks straight from the bottle >>> She is a swallower.

1- If he insists on trying a new restaurant every time he takes you to dinner >>> He likes virgins.

2- If he gets lost while driving to the restaurant on your first dinner >>> He IS a virgin.

3- If he asks for detailed description of dessert ingredients >>> He likes to talk dirty in bed.

4- If he dips his fingers occasionally in food sauce >>> He likes prolonged foreplay.

5- If he asks for the check immediately after finishing the main course >>> He suffers from fast ejaculation.

My boss keeps throwing things at me whenever he is angry, which happens a lot.

It started with light weight office stationary items such as pencils and paper clips.

Last week he threw a black stapler at me which hit my forehead and required stitching and medical treatment.

What shall I do?

Sent by: Confused/injured at the office 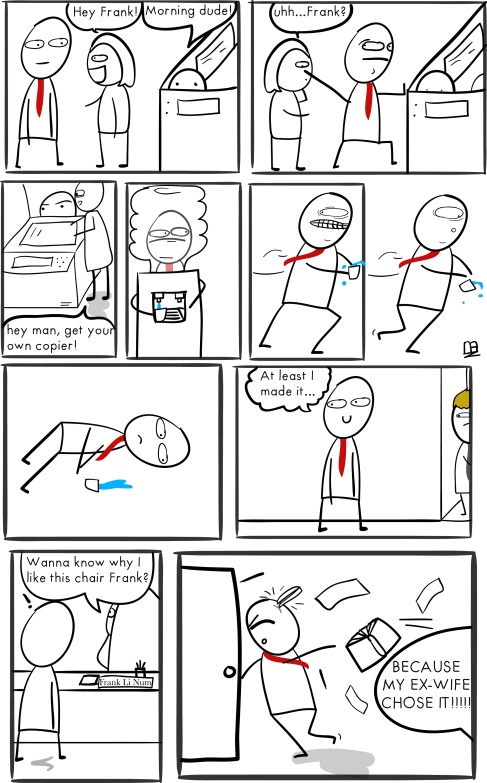 Let’s put things in perspective here so we get straight to the facts and avoid jumping into conclusions.

Firstly, if you were paying real attention at your work-space you would have seen that stapler flying towards you and you could have easily ducked away from it.

Secondly, you did not include all the facts in your letter; mainly whether your office colleagues are also having stuff thrown at them by your boss.

If that is the case, your boss is an equal opportunity thrower. Translation: there is no discrimination involved and you have no legal leg to stand on.

In layman’s terms; you have nothing to complain about.

Regardless whether you have a legal leg or an artificial one, you should always act as a real team player and get along with the flow.

Thirdly, if you believe you were singled out, assuming you can prove it in a court of law; we need to examine the compelling reasons that forced your boss to escalate his throwing choices from paper clips to staplers.

Did the paper clips throwing start as an innocent male bonding attempt on your boss’s part?

Was it part of some Human Resources exercise intended to raise morale, build team spirit and generate happiness inside the work space?

Or was it perceived as a disciplinary action in response to some major fuck-up on your part that damaged the company severely?

I am in the dark here until I receive further satisfactory clarifications.

Fourthly, I will assume for argument sake that you made a typo in printing your letter and that your boss was perhaps, at the time of the alluded throwing incidents, a female.

If that is the case, I need to dig deeper into your attitude towards her, assuming you are a male of course.

Usually female bosses are known to yield to mild momentary lapses in temper during certain days of the month, at which time you are well advised to lay low, remain silent, and refrain from disagreeing or provoking as much as possible.

Fifthly, and most importantly, being a boss is very demanding and very tough.

Your boss has pressures from above, below and from the sides.

He/she carries much bigger corporate responsibilities, unlike what you seem to carry – evidenced by the fact that you are not a boss. Look at the big picture and try to find out why your boss felt the need to throw things at you.

What is the message that he/she is trying to convey to you?

How is it related to your performance or attitude or both?

Show up in the office during the weekend.

Ask for more responsibility and more work in general.

Get along with your boss.

Eventually your boss will appreciate you and he/she will end up throwing a bonus towards you instead of a stapler.

I have a great relationship with my daughter. When she occasionally irritates me, I mention calmly that I spent a fortune on her diapers and I do not expect to be paid back with what went into them.

Join 582 other followers
Follow Wild Musings by Azahzah on WordPress.com